mike and i both took a pause from our schedules, and we spent 4 days in lima together! hooray! but really, i am just grateful that he was willing to travel all the way down to peru for just 4 short days…which flew by way too fast. we had a blast! we stayed in a condo with an ocean-view in miraflores, walked around town a lot, went bowling, explored barranco, finally visited the ministerio de cultura to visit the shining path exhibit, ate ceviche, and drank plenty of chicha morada. we had another grand finale feast at another top restaurant in peru, this time at central restaurante. it was named as one of the 2013 top 50 restaurants in the world, and the number one overall restaurant in peru. honestly, it was incredible. personally, i thought it was better than astrid y gaston, because they paid attention to every final detail, including the presentation. i still find myself salivating over all of our dishes…mmmmmm…

enoying the ocean-view from our balcony. 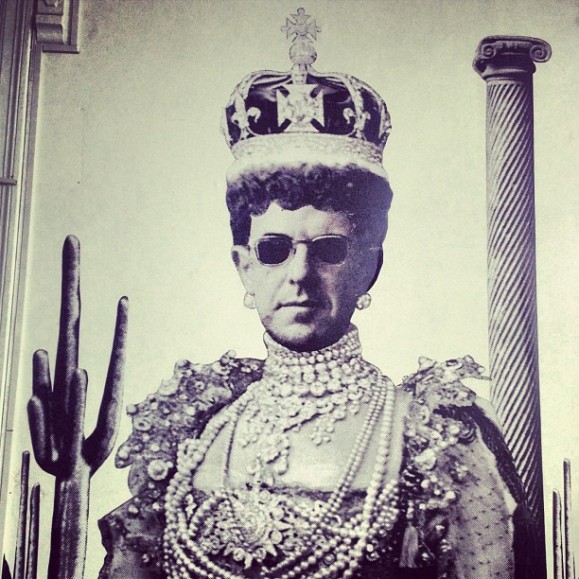 one of these things is not like the others.

enjoying the plaza in barranco. 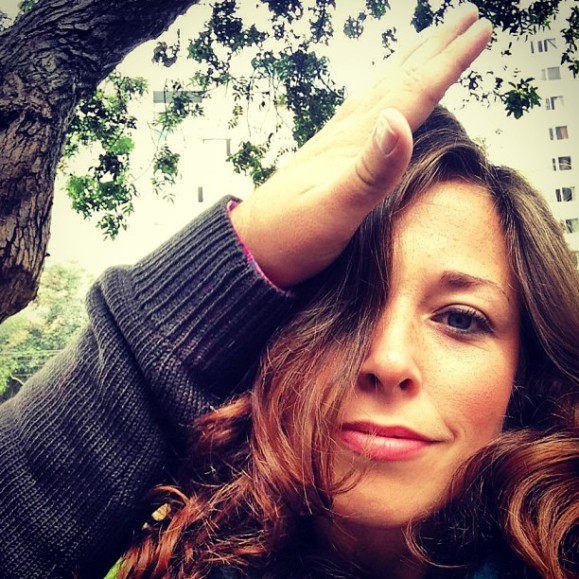 i asked mike to feel how soft my hair is, and this is how he responded…so romantic…

i had a really hard time with the front door to our condo building…as in it intimidated me…but seriously, it was HUGE!

i had such an incredible time with him, and now i have reacomstombrared myself with the life in the norte. it’s tan caliente right now, and i am counting down the days until we get to see each other again!!! 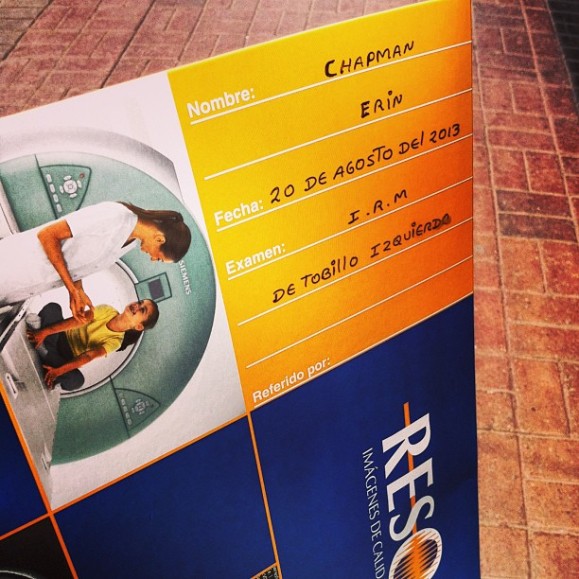 once a year, the lima peace corps office, brings all the volunteers to lima for a week of medical checks and a couple of days of training. the training was…well let’s just say the most interesting part was learning what everyone else has been up to for the past year. the rest of the week i was in and out of doctor’s offices throughout lima. i had one day where my first appointment was at 8 and i was spent all day traveling and waiting for my other appointments, with my last one ending at 8:30pm. the results? well, i learned that my fateful fall in the jungle has left me with a torn ligament in my ankle, and i got a broken tooth cap and only had 1 cavity! the bad news, is that i have to go back to the dentist this week for some follow-up work. the good news is that i got my broken glasses replaced! and that i finally learned why my ankle still hurts…though, i would have preferred something like “a really bad sprain…” oh well.

don’t worry. my friends and i still found plenty of time to eat plenty of delicious food…and by food, i obviously mean pinkberry. 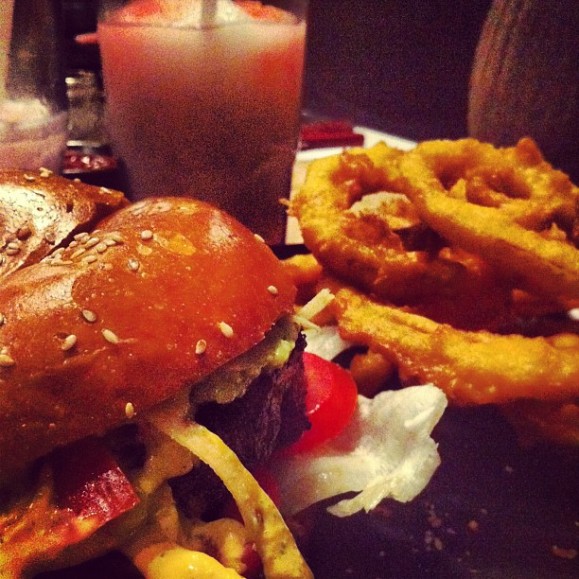 we also made time for gaston’s amazing hamburgers at papacho’s.

our last evening together.

despite the altitude sickness we still had a blast traveling around peru, and trying all sorts of new and delicious food and seeing incredible sites throughout the country. it was such a treat to be able to share my life, my site, my community, my family with mp, and now there is someone else back home who knows what i am talking about when i talk about the ants in my bed, the pig outside my window and how much samia has grown.

for our last night together, we had a grand finale of some sorts. we dined at the world-renowned astrid y gaston, listed as one of the top 50 restaurants in the world…and goodness it was worth all the hype. it has been almost 4 days since we have eaten there and i am still full. the flavors there were incredible and they really did take peruvian cuisine up a number of levels…which i, honestly, didn’t think was possible. plus, it was just fun to spend a nice quiet evening together before we said goodbyes at the airport.

today marks my first day back to work in site…which really means that i will be going from socio to socio to let them know i am here…that i didn’t move away…and to just talk and see what i can do to get myself back into the swing of things. site is still site. there are still a number of ants in my bed and they have moved back into my computer as well. the pig in my backyard has gotten a little bigger…samia has gotten a little taller as well…and the weather only seems to be getting hotter. i guess it’s summertime here…now i just need to see if the mangoes are getting sweeter…

also. just a short 3.5 months until i make my way back to the states for a quick visit to mp. considering that it had been 6.5 months previously, this should go faster than lightening…i hope!

in the plaza mayor in lima.

during my 2.5 months of training, i never went to lima all that often. i was, generally, too preoccupied in integrating with my family in order to increase my language proficiency, so having a few days in lima with mp was perfect. we went to the main plaza as well as visited the catacombs, which really gave me the heebyjeebies, but so much fun at the same time. i definitely recommend this stop while exploring central lima! 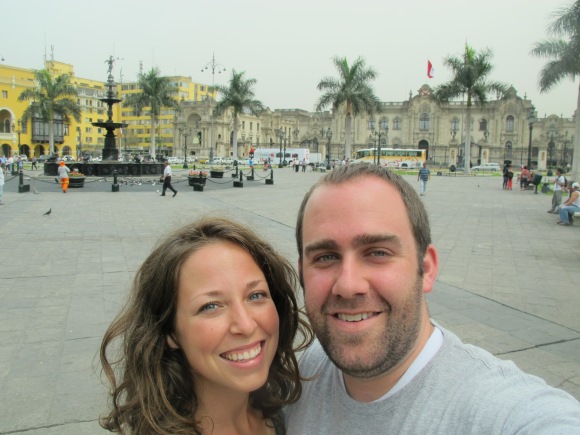 only smiles in the plaza mayor.

the cathedral of san francisco, where the entrance to the catacombs is located.

earlier in the day we visited my family in lima, and they gave us the best recommendation we received all week: parque de las reservas. at night they have a giant water show, and the park is filled with numerous other fountains with light and music and interesting structures. it was so much fun! however, i would say that we left wishing that we had worn our swimsuits, as it was so tempting to run and play in all the fountains as well. 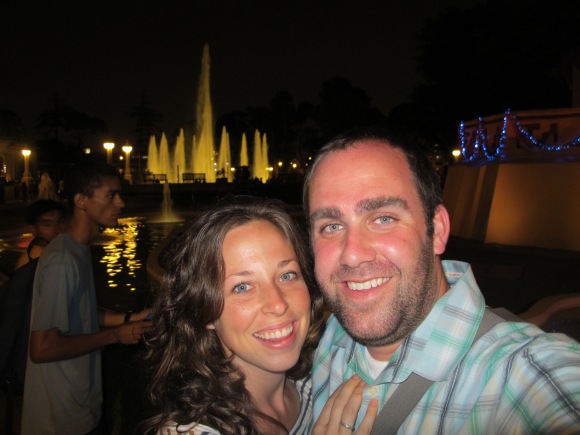 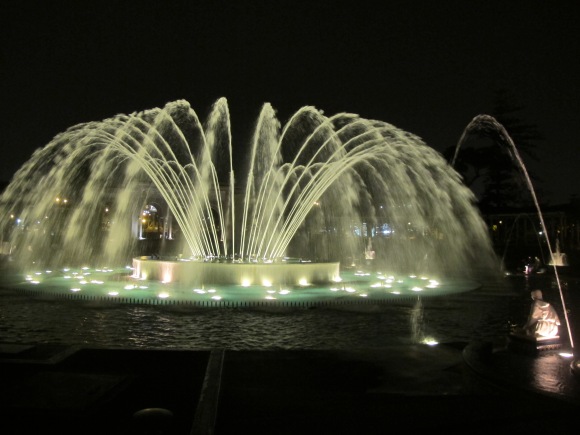 we were soaked after running through the fountain tunnel behind us.

this one was a blast to watch. all the kids tried not to get sprayed until…

if you ever have a free evening in lima, i highly recommend this. it is only 4 soles to enter and is located next to the national stadium. it is so much fun and will bring out the kid in you! 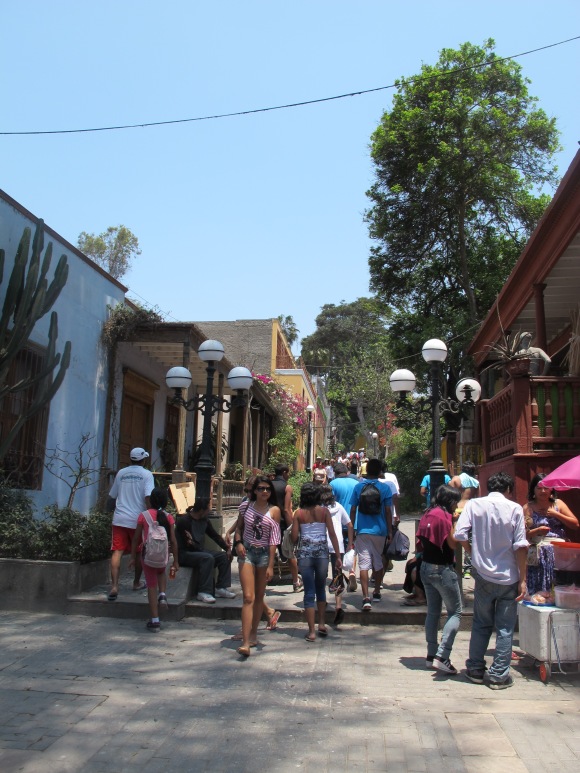 the streets were lined with old houses that made me feel like i was in the old-timey french quarter of new orleans.

while walking along the beach, we made our way over to the neighboring district of barranco. it’s known for it’s architecture, as it was the home of  many of the french and italian immigrants. now it is just full of ceviche restaurants and to a more relaxed bohemian feel than the rest of of its neighbors. 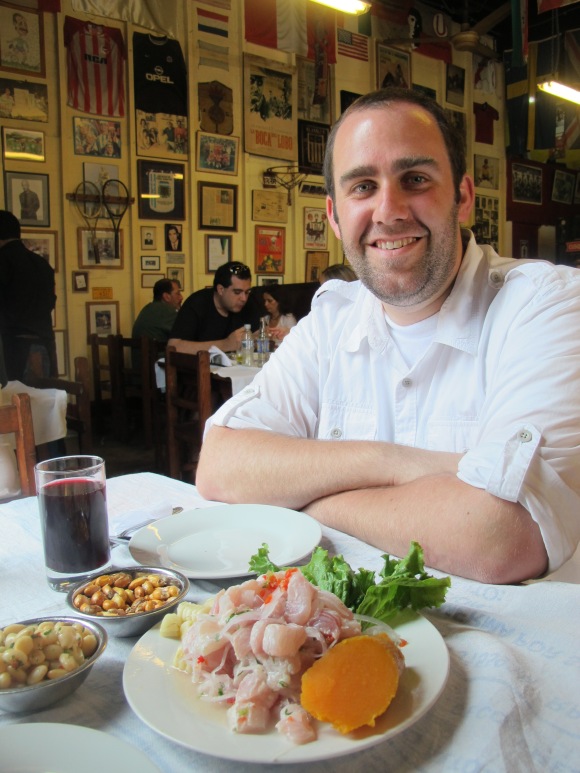 we grabbed some ceviche at canta rana, which had the best ceviche i have ever had. the atmosphere of the restaurant was a delightful change of pace as well.

i loved the delightful little library in the town plaza. 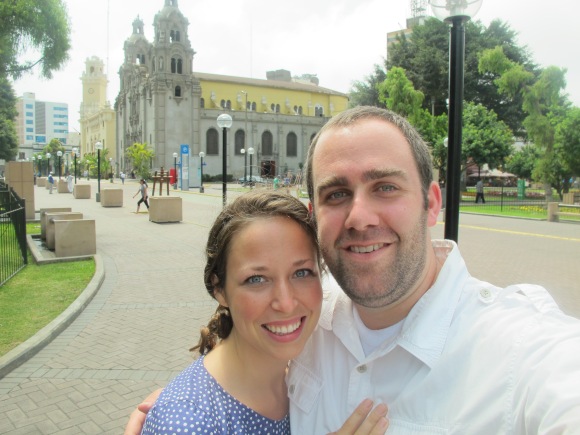 at the nearby parque kennedy.

while in miraflores, we stayed in a condo just 2 blocks away from parque kennedy and only a 15 minute walk to the beach. we frequented both locations quite a bit during our last leg of the trip. 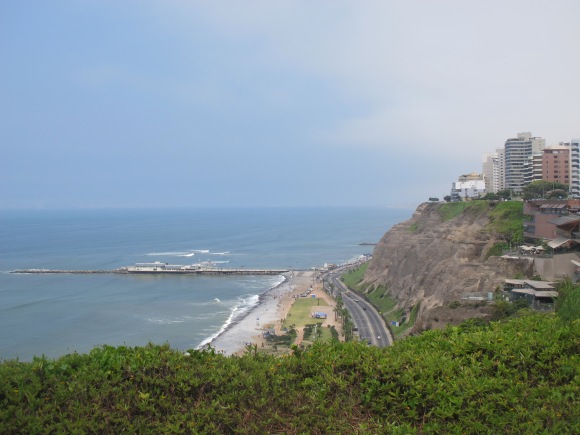 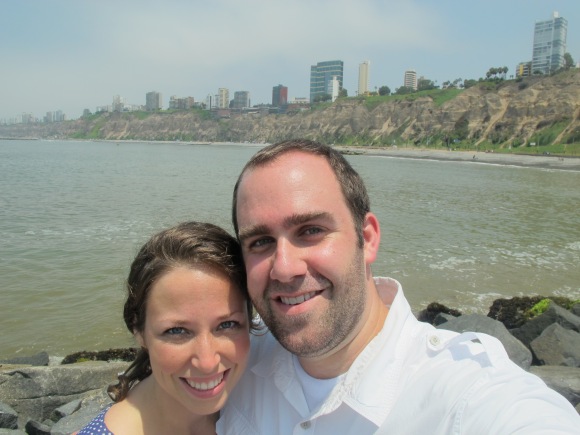 walking along the beach.

getting ready for our night out.

we arrived in lima, miraflores to be exact, on new years eve. peruvians have all sorts of traditions for new years. first of all, everyone wears yellow (we obviously dropped the ball on this one, as noted above), and that especially includes yellow underwear…stands selling the garments littered the streets. at midnight there’s a lot of fireworks and many eat 12 grapes for good luck and run around the town fountain (sometimes with suitcases) in order to bring great travels in the new year. in my site, many people had miniature dolls that they burned in the middle of the street signifying leaving the old behind in 2012 and becoming anew in 2013. having it be that we were in lima, we just stuck with the grapes and the fireworks…but it was still a lot of fun. in fact, i woke up at 5:30 am to all of lima still celebrating!

some of the crowd sporting their yellow. 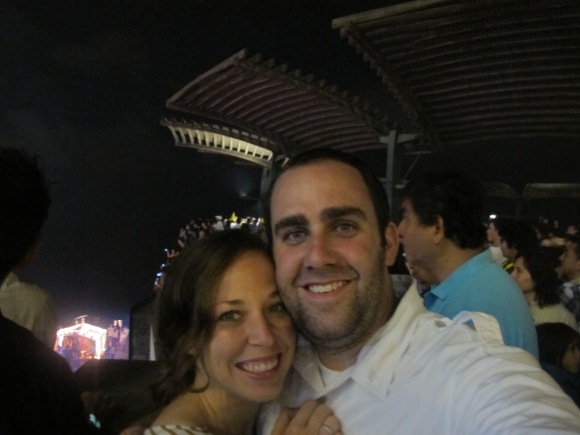 just after it struck midnight! i can’t believe it is 2013 already. 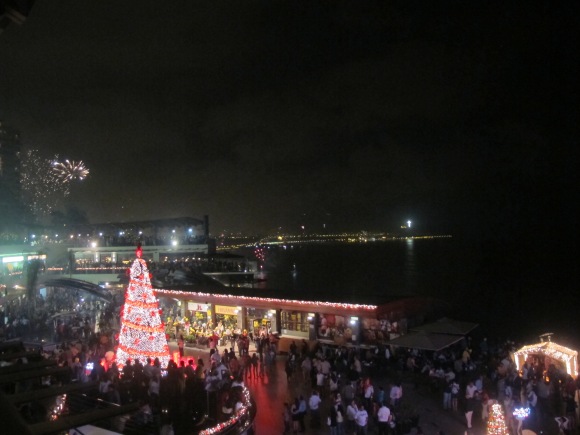 this picture really doesn’t do the fireworks justice. not only could we see fireworks along he coastline, but they were happening right behind us too. so much so, that it was hard to watch without getting debris in our eyes, but still so much fun!

a day of rest.

saturday while everyone was recovering from the night before, michelle and i walked along the coast line in miraflores. followed by going to a bike training meeting, with only 2 other people. and then she and i ventured to la molina and i got to finally go to the temple. it was a much needed day of rest and recuperation from a n exciting week. 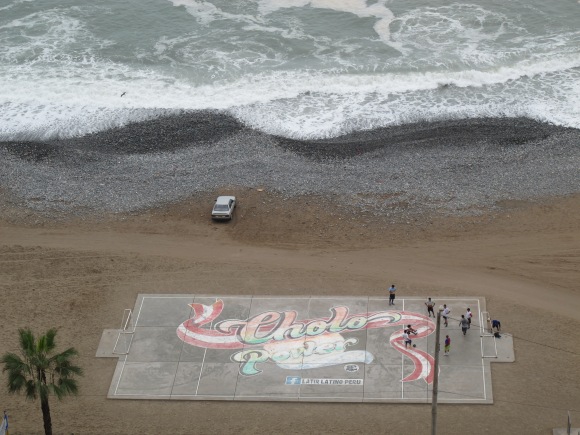 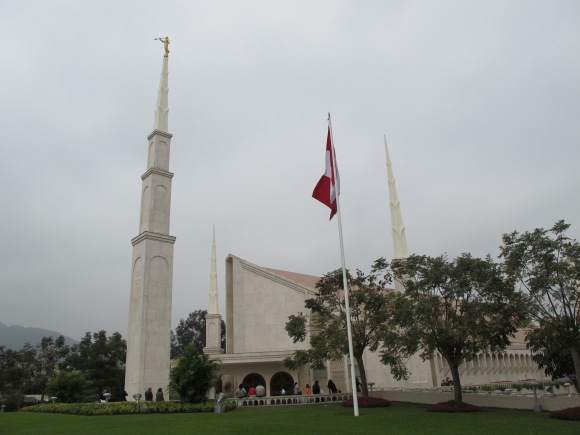 i went there saturday!

i did it. on friday, i became a real, true peace corps volunteer. we were lucky enough to have our swearing-in ceremony hosted at the ambassador’s house, which was beautiful and ornate. we all were able to mee the ambassador, as well as the mayor of lima (which is he south american equivalent of meeting the mayor of nyc), as well as other mayors from nearby municipalities. i also got to meet with old pcv’s from the 60’s in which one of them told me about all of the dysentery he experienced during his time in peru. talk about words of wisdom.

overall the ceremony was beautiful. the part wear we stated the oath was really incredible. it made this entire process worth it. saying goodbye to my host mom was the hardest part. it was such a mix of emotions. as well as saying goodbye to the training staff. they were such an important part of my support system here that it was hard to go, but it is because of their support and determination for all of us that i even feel ready to go and concur. so thank you for that.

my host mom and i ready to head to the ambassador’s house. 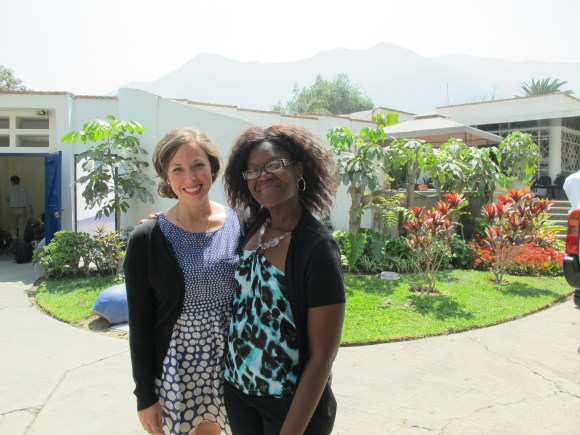 michelle and i at the training center. 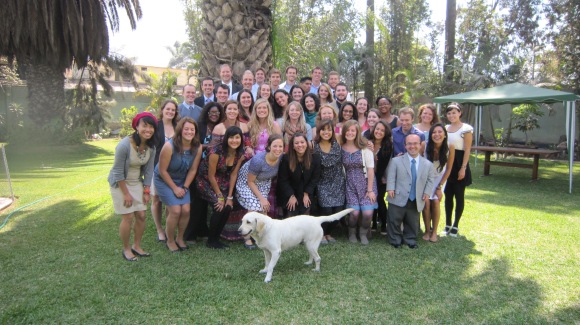 we should all be taken very seriously. (and who knew my mouth was that huge???)

we couldn’t bring our camera’s to the ambassador’s house for obvious security reasons, but there was an official photographer there. maybe one day i will receive the pictures from it…after our ceremony, our country director threw peru 19 a welcoming reception at his house. it was fantastic! there was a small fire pit, buffalo chicken wings, anticuchos (beef heart on skewers) and a dance floor. it was a blast! 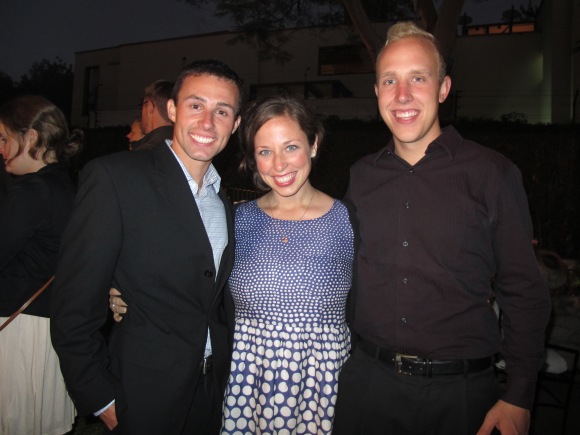 steven, me and sam.

anticuchos (beef heart) on the grill! 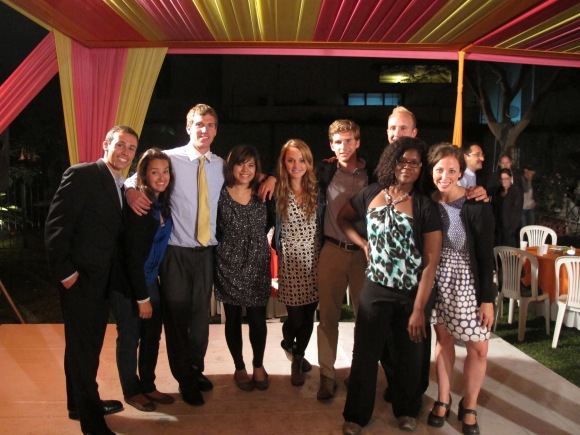 the lambayeque crew ready to head out!