a teacher that i have worked closely with at the main colegio in town asked me to help him in planning and executing a school-wide activity for international environment day (june 5). we had a flood of ideas, but the biggest difficulty that was presented was engaging more than 700 students at the same time. as the main event, we had all the students come to the school in the morning and cleaned the entire school grounds. this was inspired by a “chiclayo limpio” activity on earth day, where all the schools in chiclayo took to cleaning their school, which really meant, cleaning all the miscellaneous trash that covered the school grounds. the kids really enjoyed this, as we had music playing, and we were able to actively and continuously engage the kids with the realization that when they throw their trash on the ground, no one will pick it up but them. that is a part of the culture that runs rampant here, is the blatancy of littering…willie nelson would be so disappointed. the additional problem is that the trash just builds up, until there is enough dirt that you are practically chipping trash out of the ground.

sweeping dirt. or really getting trash that has been built up in the dirt.

it wouldn’t be a real event in my site, if there was no pasacalle, so of course, after we filled trash bin upon trash bin, we got the school together to march through the streets with the municipality. hooray for the environment! 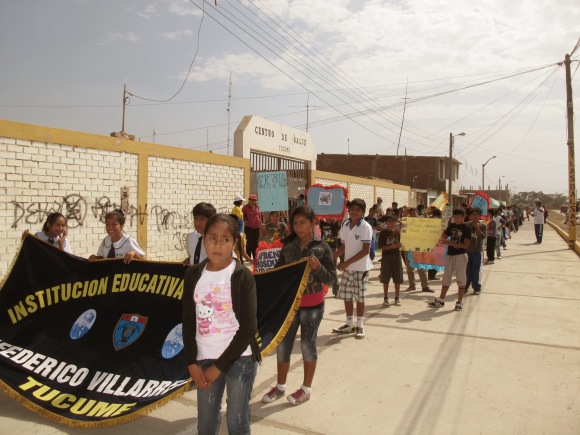